Live at the Phoenix Theatre

Tickets available from £20.00
subject to a transaction fee of £3.65
Buy Tickets

‍Book Come From Away Tickets At The Phoenix Theatre Box Office

The critically acclaimed musical ​Come From Away​, the moving tale that captured the spirit of true events that transpired in the wake of 9/11.

Winning four Olivier Awards, including Best New Musical, Come From Away has swept the West End being praised with a wave of five star reviews from both critics and the public alike.

Come From Away ​tells the story of what happened to a small town called Gander,Newfoundland and Labrador during the events of September 11, 2001, when 38 planes had to unexpectedly land. The small community had to rally together throughout the struggle and accommodate nearly 7,000 passengers following the tragedy of 9/11. Many of the characters are based upon real-life passengers, including Nick and Diane Marson, a Brit and an American who fell in love in real life following the disaster.

Tony® and Grammy® nominated writers ​Irene Sankoff ​and ​David Hein​ have taken the accounts of those involved and created a musical full of charm, wit and compassion.

Book Your Tickets At The

Come From Away London Cast & Creatives

JENNA BOYD - Beulah and others

TARINN CALLENDER - Bob and others

JAMES DOHERTY - Claude and others

MARY DOHERTY - Bonnie and others

ALICE FEARN - Beverly, Annette and others

KATE GRAHAM - Diane and others

ALASDAIR HARVEY - Nick, Doug and others

HARRY MORRISION - Oz and others

EMMA SALVO - Janice and others

CAT SIMMONS - Hannah and others

Come From Away Reviews

★★★★★ THE TIMES - "This musical gets everything right. Irresistible and inspiring."

★★★★★ TIME OUT - "This miraculous masterpiece is totally, soul-feedingly wonderful."

THE DAILY BEAST - "A celebration of the best of humankind."

THE GUARDIAN - "A global phenomenon, and you can see why." 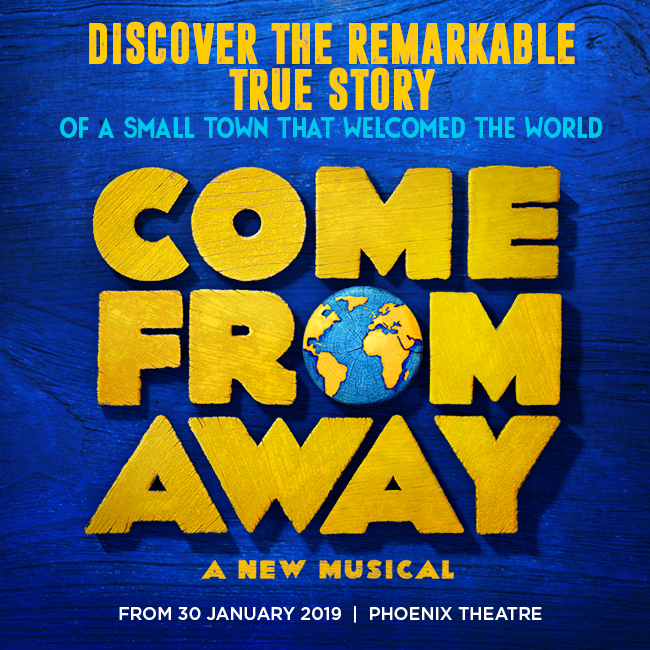